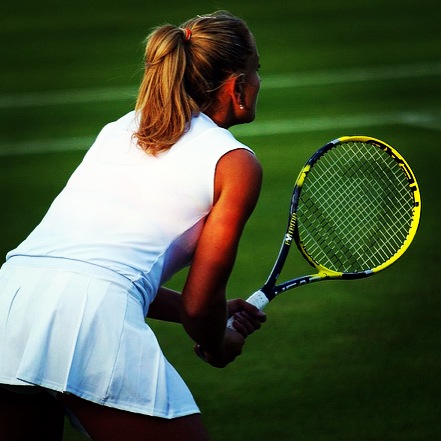 As the British Summer (hopefully) approaches, our attention turns to the shortest and most specific surface of our year, and my favourite: the grasscourt season. From a distance, the pristine lawns are beautiful in their greenness and perfection, and the quieter hush of grasscourt tennis can seem more elegant, as we feel the history of the sport upon it's turf. The reality can be quite different, and a whole lot more gritty. As with most things in life, the adaptation we must make in such a short space of time, requires working hard, and working smart.

Let's start with the physical preparation.

The body
Grass is softer than a hard court, therefore it must be easier on the body right?! Wrong! While it may be easier on the joints than the pounding of hard court tennis, the 'give' or the 'sink' in the surface, mean that our muscles have to work harder to stabilise the joints, akin to let's say in the extreme, running on sand. And with the ball bouncing much lower, the muscles that we need to recruit the most to get down to those low balls are the glutes, to protect the lower back, hamstrings and knees. Equally the unpredictability of the bounce, mean that our core as a whole has to be strong to be able to react to an overstretch here or a unexpected move there. So in the days or weeks leading up to that first hit on grass, take extra care to increase core control and stability, and get those glutes strong! How low can you go?!

The points on a grasscourt tend to be on average shorter than other surfaces, lending itself as it does to more aggressive tennis. With this in mind, my speed and movement drills become more explosive, with an emphasis on 1st step speed, and repetitions of drills that are 5-10 seconds long, in line with the length of points I can expect to be playing. Equally grasscourt movement itself, can be a tricky challenge, and one you feel slightly wierd about in the first few days of getting back on the green stuff. Grasscourt shoes are essential, but still a worn area or some leftover dew can be pretty scary, and you only have to have watched a little of grasscourt tennis to know that slipping is inevitable and the best we can do is to minimise it. I've been taught to move low, and move strong on grass, and focus on being balanced and efficient. Just watch Andy Murray if you want to know how it really should be done.....we can all dream :)

The mind
I think what I've learnt through the years of playing on grass is that it's important to use your mind to work with the surface rather than against it. It can be frustrating at times, with a bad bounce on a big point, or an opponent serving bombs that you can't get a hit on. But accepting that this happens, and knowing that it is a part of the surface can really help. I for one certainly have to force myself to have a more aggressive mindset than is natural to me, and this actually encourages my best tennis, as I have no choice but to go forward. But grasscourt tennis also lends itself to a guile and intelligence that I love, and there is no better feeling than exposing an opponents weakness in this way. Use your mind to use the court.

Another challenge for the mind during the grasscourt season, is something that none of us have any control over, the weather! But how we react to it, we can control. For someone like me who is bored easily and still not very good at keeping still, the waiting game for the rain to stop or courts to dry can be tough. I like to keep my mind occupied, and have found that it is as important to switch off as it it is to switch on. Use the time wisely, but be ready. Many have been surprised when a full day of grey clouds and drizzle, suddenly gives way to a beautiful summers evening, so be prepared to play later than expected, and later than that again.

The tennis
Grasscourt tennis through the years has changed, partly through the courts and balls becoming slower, but also due to tennis itself changing- as equipment has developed and the physicality of the sport has reached the incredible levels we now see among the top players. But if it's possible to see all court tennis anywhere, it is most likely to be on grass, and variety is the spice of life no?!

Technical changes can be difficult to make for such a short season, but there's no doubt that adapting a little can help a lot. Shorter takebacks and more compact swings, particularly on the return, help with the ball coming through faster and lower than usual, and moving forward through the ball with your body will help you to produce a more aggressive shot and a better position on the court.

Tactically, the points are on the whole shorter, meaning more emphasis on attacking tennis. For most that means more attention in practice to serve, return and the first shot of the rally. For some it means the opportunity to come forward to the net, so the 'finishing game' of put away volleys and mid court approaches are essential to honing this skill. For a few, it's a chance to improvise, to show the softness of handskills, or the athletic ability to dive, or the perfection of a tactic of a by gone era, the beauty of the serve and volley. And if you want to see all of this and more, watch Dustin Brown.
But there's something else about grasscourt tennis that is often forgotten, and hard to define. The ugly side. About finding a way to make the ball in the court, by whatever method you can. About digging up short slices, or stumbling and getting back up and getting a racket on a pass. About feeling like you have no chance to break, and then suddenly creating an opportunity to do so. About showing grit and resolve and the ability to get down and dirty....

Why I love grass court tennis
So what is it that I love so much about playing on grass, and what makes it so special for me?
Firstly it's a chance for me to play at home, in England, with family and friends close by, a luxury I don't have for 26 out of 30 weeks on tour. Secondly, it's a surface that feels very natural to me, that I've made some incredible memories on, and that is quite simply, great fun to play tennis on. And lastly, there's that other thing that happens, every year whether I am part of it or not, the greatest tennis tournament at the most beautiful club in the world, Wimbledon. At 8 years old, with a treasured ground pass clasped tightly in my hand, I asked the security guard on centre court if I could just peep over the rope to have a little look because my favourite player was about to play. By pure chance, a businessman came down the stairs from the court, and handed my Dad and I his centre court tickets as he had to get home for dinner with his wife. I hugged him, ran up to find my seat, and watched in silence and awe as Andre Agassi walked onto that breathtaking court. It was the quietest I've ever been. After the warmup, as they started the match, I whispered to my Dad, "When I grow up, that's what I want to be, a tennis player. I want to play tennis here, at Wimbledon."

The grass court season isn't the sole reason I play tennis anymore. But it was certainly the reason I started to play. And to that, I owe a great deal of gratitude.