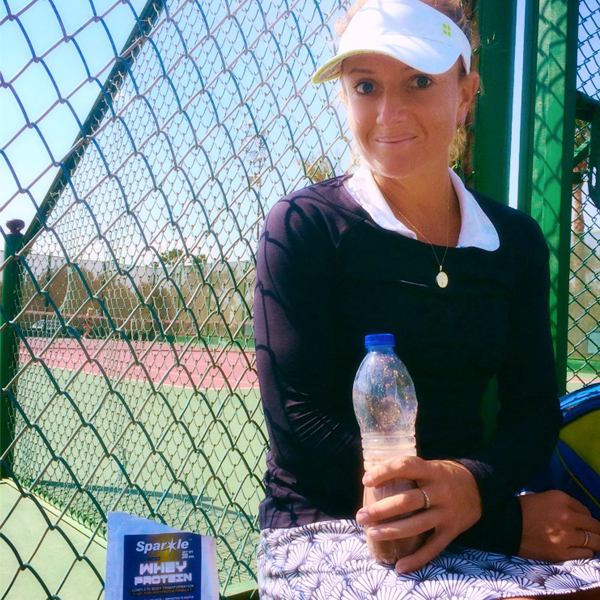 Today is the first day of my competitive year of 2018. I am in Egypt which is a great place to start as I get to play several events in one location.

The 3 or 4 events that are held locally help to minimise the physical and financial cost of travel. The resort alone hosts over 40 tournaments across the year.

I arrived in Egypt on Saturday and after recovering from the long journey from South Africa with a light run, a core and injury prevention session in the gym and a swim, I started my preparation for the upcoming matches in the resort town of Sharm el Sheikh, which is located in the Sinai peninsula. It is a place I have played well at in the past, and it always feels good to return to an old hunting ground, where you know the routine and are comfortable in the surroundings. The weather is also perfect every day, aside from the difficulty of the wind, and the body feels a great deal better in the sunshine and fresh air, than it does indoors in the cold of Europe at this time of year.

‘…the body feels a great deal better in the sunshine and fresh air, than it does indoors in the cold of Europe at this time of year.’

So with this in mind, and with a restored body and mind after a little rest at Christmas and a tough training block in South Africa in the bank, I feel ready to be here.

People often ask me how I prepare for matches, especially families I stay with around the world or parents who are trying to discover how it all works. In my opinion, there are very few sports in the world as tough as tennis for this. We rarely have the luxury of a perfect preparation, and weeks or even a few days in lieu before a tournament are hard to come by, due to the ongoing nature of the tour. Each tournament except grand slams, are a week long so the turnaround time from week to week is very fast. Fly, land, recover, practice, play match, win, lose, fly again... are the usual turn of events all within a few days.

As this was the first event of the year for me, I left South Africa relatively early on Friday for being in main draw here, and flew 9 hours to Dubai, and 3 to Cairo before choosing to spend the day there recovering in the gym and pool and catching up with a good friend in the evening, before a short flight down to Sharm the following morning.

Having settled into my room at the hotel, I did an extended hours long warmup in the gym to ensure any stiffness from the flight was gone, mobilising the joints and focussing on full range of motion through rotational and dynamic flexibility exercises and stepped on court for my first practice late afternoon. The first hit in new conditions is rarely pretty, and the object is to try to feel the ball adjusting to the court pace, weather and type of ball.

‘The first hit in new conditions is rarely pretty, and the object is to try to feel the ball adjusting to the court pace, weather and type of ball’.

I practised with a bubbly young Italian girl who I had never met, and we managed to hit a lot of balls with good intensity and a reasonable rhythm. The Dunlop balls felt heavy after playing with Wilson during pre-season training, and the wind was pretty strong, so I tried to focus on good contact points and strong footwork. I then ran 5k on the treadmill at high intensity and worked through an injury prevention session that has evolved in my program little by little, working on small exercises for old injuries of my right hamstring, left Achilles, left wrist and right shoulder. I did some stretching, organised practice and courts for the following day and headed for dinner on my own.

On Monday, I woke early as it is difficult to get court time for practice once the matches start and I hit 8-9.30am and then again from 5-6pm under lights, the second practice being with my Romanian roommate who I had barely met until she arrived. Sharing the room helps us to cut the cost of the hotel but it is sometimes not the easiest when you crave your own space and live primarily in hundreds of hotel rooms week after week around the world. But this time I got lucky, as Laura turns out to be a like-minded soul - a hard working player with a professional honest attitude and a great sense of humour, and I liked her immediately. Laura beat me in the practice points we played, and I still didn't feel very comfortable with my ball strike or timing in the wind. After a good dynamic core session and some yoga to calm the mind and rebalance the body, I feel as ready as I can be for the start of my competitive 2018.

‘After a good dynamic core session and some yoga to calm the mind and rebalance the body…, I feel as ready as I can be for the start of my competitive 2018’.

The draw was made and I learned I had a tough match against the No.4 seed from Belgium on Wednesday and today would play an American and a Kiwi girl- the latter who had won back to back doubles titles the last 2 weeks here. I woke up today looking forward to playing the match, and had a good practice with my Polish partner who I have not played with before but who I had seen last at some tournaments in Brazil in 2016 before she had shoulder surgery. We combined well as a team and although it was far from perfect, I felt the performance was pretty good and I liked Katarzyna's intent to come forward and play aggressive doubles like me. We won in windy conditions with a comfortable super tiebreak and 2018 was off to a winning start!

Now I have a light practice early evening to get some rhythm before tomorrow, before doing recovery and the same injury prevention exercises as Sunday, but this time just 50% of the quantity as I have a match tomorrow. I bumped into my Egyptian friends at lunch who are here as their Davis Cup match will be held this weekend in the same resort against Norway, and they asked me to join them for dinner which will be lovely. I congratulated one of the guys for playing his first Australian Open after grinding through events like these all year last year, and winning an incredible number of matches to make the ranking cut. This is why I'm here.....

It's in times like these, that I realise how lucky I am. Across the world, wherever I am, travelling alone, people offer their help and look after me a little, like these guys- and I'm so grateful for that and for the friends I have made around the world through tennis.

So everything is ready, the stage is set. I feel good physically and mentally and ready to fight again and deal with whatever this crazy rollercoaster life on tour will throw at me. Wish me luck for tomorrow, let the battles commence!